My Uncle, Lt Irving Shapiro (now Irving Sharrow) ditched on 05 FEB 45 about 30 miles off the coast of Italy on their way back from an aborted mission. It was either off Brindisi or Ancona. (I don't remember) My Uncle was a brand new A/C and was assigned a ship that had been battered up, repaired and flew out of trim. As a result it took more power to keep up with the rest of the squadron, thereby burning excess fuel. If I recall my Uncle's story, the target was solid cloud cover so they aborted the mission, dropped their bombs somewhere over the Alps and headed home. Gradually, each engine flamed out as they ran out of gas. There was a solid cloud layer below them, bases about 500 ft and tops were layered to about 10,000 ft. They radioed a MAY DAY and a couple of P-51 fighters, possibly Tuskeegee Airmen, escorted my Uncle's heavy "glider" down until they entered the clouds. They got a DF fix and a British rescue vessel nearby headed for their last known position. When they hit the water the aircraft broke in two, just behind the cockpit bulkhead. My uncle hit his head on the windshield because his seat was not strapped to the frame which was the emerg. proc. for ditching at the time. In all the excitement and panic, Eisen forgot to tie down his seat and also was having trouble closing the bomb bay doors. Sea water gushed into the open bombay and filled the back of the aircraft. It's believed that is when tail gunner SSgt. Albert Cymbalisti drowned. As ice cold water filled the cockpit, my Uncle came to, undid his harness and climbed out thru the hatch, catching his last breath as he surfaced 8 ft. above. The cockpit section was completely submerged. He remembers the rest of the crew already had the over wing life rafts deployed and were climbing in when he popped the surface. They helped my Uncle into the raft and floated in the ice cold water for several hours until the rescue boat finally picked them up. My Uncle went to the base dispensary, got stitched up over his left eye and was back in action a couple of weeks later. 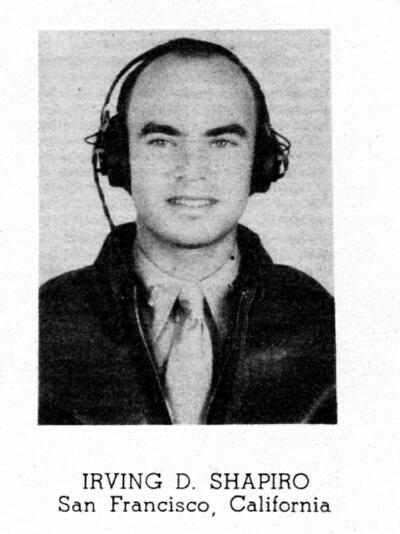 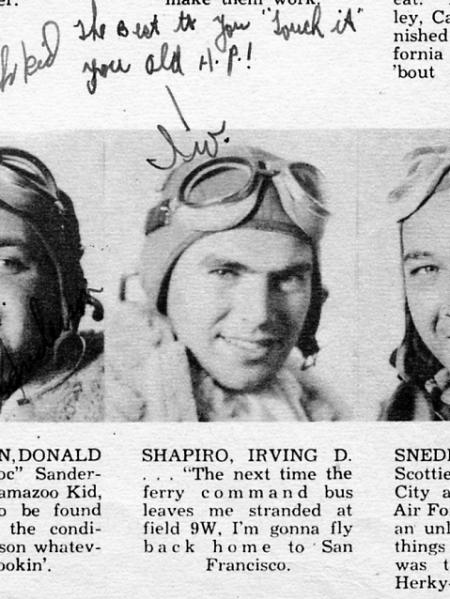 The following information on Irving Shapiro is gathered and extracted from military records. We have many documents and copies of documents, including military award documents. It is from these documents that we have found this information on 1st Lt Shapiro. These serviceman's records are nowhere near complete and we are always looking for more material. If you can help add to Irving Shapiro's military record please contact us.

Please contact us with any biographical data, pictures or other information regarding the service and life of Irving Shapiro.