On 6-13-44 Lt Leo Fletcher- 757 th Bomb Squadron- ditched his B-24 in the Adriatic Sea near Ancona, Italy, while returning from a 459th BG mission to Munich, Germany. His plane was severely shot up by flak over the target and by German fighters on the return- one engine was out and he was very low on fuel. Ancona, at that time, was still under German control. It was windy and the sea had large swells when he brought the ship down on the water. The first contact with the water was smooth but the ship soon nosed into a large swell, buckling the fuselage just ahead of the cockpit. The crew were thrown sround the ship by this impact and both Lt Fletcher and his co- pilot were thrown thru the windshield. Two other crewmembers were seriously injured. All managed to exit the plane and get into life rafts to wait for Sea Rescue launch. These remarkable photos show the crew being rescued by the British Sea Rescue Vessel # 1046 seneral hours after ditching. ( See additional Letter and Photo of the British Launch Crew ). 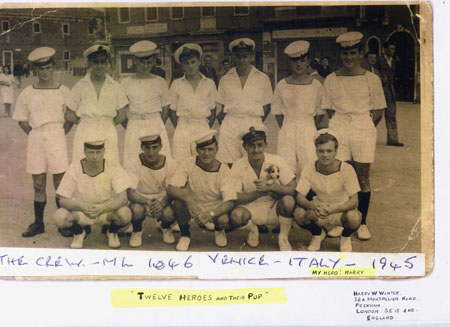 British crew of Royal Navy Sea Rescue Launch # 1046 who rescued Lt Fletcher`s B-24 Crew when he ditched on 6-13-44 in the Adriatic Sea near Ancona, Italy. This photo was taken later in 1945 when this crew was in Venice, Italy. One of this crew later inquired about how Lt Fletcher`s crew fared after the ditching. 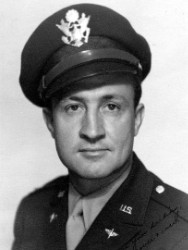 The following information on Leo Fletcher is gathered and extracted from military records. We have many documents and copies of documents, including military award documents. It is from these documents that we have found this information on 2nd Lt. Fletcher. These serviceman's records are nowhere near complete and we are always looking for more material. If you can help add to Leo Fletcher's military record please contact us.

Please contact us with any biographical data, pictures or other information regarding the service and life of Leo Fletcher.