Robert Edward Schnell (April 3 1916- June 3 2007) - Born in Benwood,WV Bob enlisted in the navy from high school,serving on the battleship USS New York and studied at the Naval Academy 1936-37.He married Ileane Beatty August 19,1939 and was a West Virginia State Trooper from 1940 to 1942 when he enlisted in the Army Air Corps.After cadet and pilot training,he was assigned to the 459th BG and the 756th Bomb Squadron in the 15th Air Force, Italy.

Lt Bob Schnell`s B-24 was shot down on 459th BG Mission # 86, 8/7/44,target Blechhammer,Germany oil refinery.The 756th BS War Diary for August 7,1944 states that a German ME 109 fighter scored a direct hit on Lt Schnell`s B-24 rudder and a portion was knocked off.His plane was last sighted over Yugoslvia losing altitude and about to crash. Five parachutes were seen exiting the plane.

Bob was a P.O.W. in Stalag VII-A, 1 km north of Mooseburg,35 km northeast of Munich, Germany in a flat area surrounded by hills.The camp barracks were rectangular wood building divided into A & B sections by a central room for washing and eating.POWs slept on triple-deck wooden bunks with gunny sack mattresses filled with excelsior. Gradually the number of men per barracks increased from 180 to 400. Men slept on tables, floors and on the floor. The barracks had no heat and were damp,cold and unhealthful

Bob returned to the WV State Police,retiring in 1961 and retired for good in 1980. 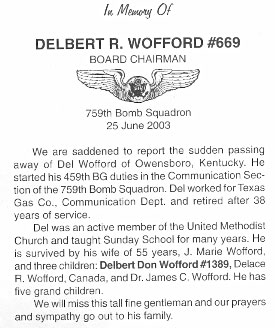